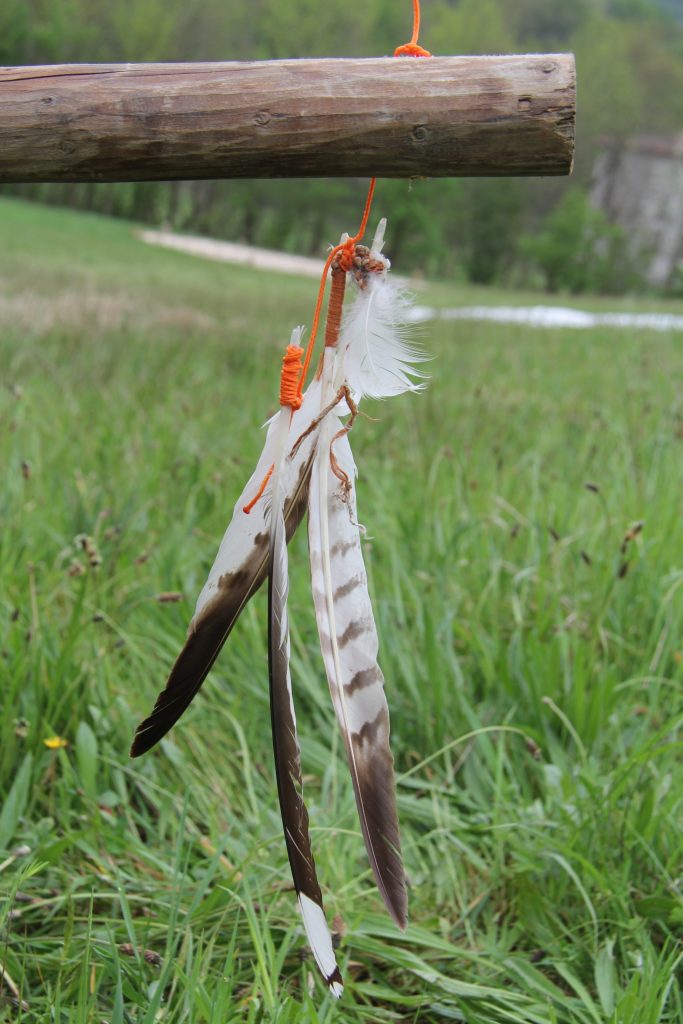 This dimension manifested itself in the intention to recover the connection with the transpersonal or sacred sphere . To do this, we tried to integrate the spirit, or consciousness, in each daily act as an inherent part of life. Occasionally , we were able to achieve this especially when we managed to go beyond our mental limits . That is why, from the beginning, it was essential to become committed to the awakening of consciousness and to inner transformation.

Likewise, during our first phase as a group, in addition to rescuing and taking part in traditional rituals, we participated in different shamanic ceremonies that many indigenous cultures have kept alive: vision quests, fire rituals, shamanic rituals, pipe ceremonies, medicine ceremonies and ceremonies in sweat lodges, among others.

In short, we have practiced a form of social spirituality in which the intention of the personal transformation processes has been to contribute to collective healing. And, to the extent that the heart impulse developed, the shadow also manifested itself in selfishness, competitiveness … The key has been to include everything that emerged in the process. In reality, it has been a constant challenge to pursue the goal by taking responsibility for those most fragile aspects of oneself that, if not looked at and cared for, drag us out of the way. 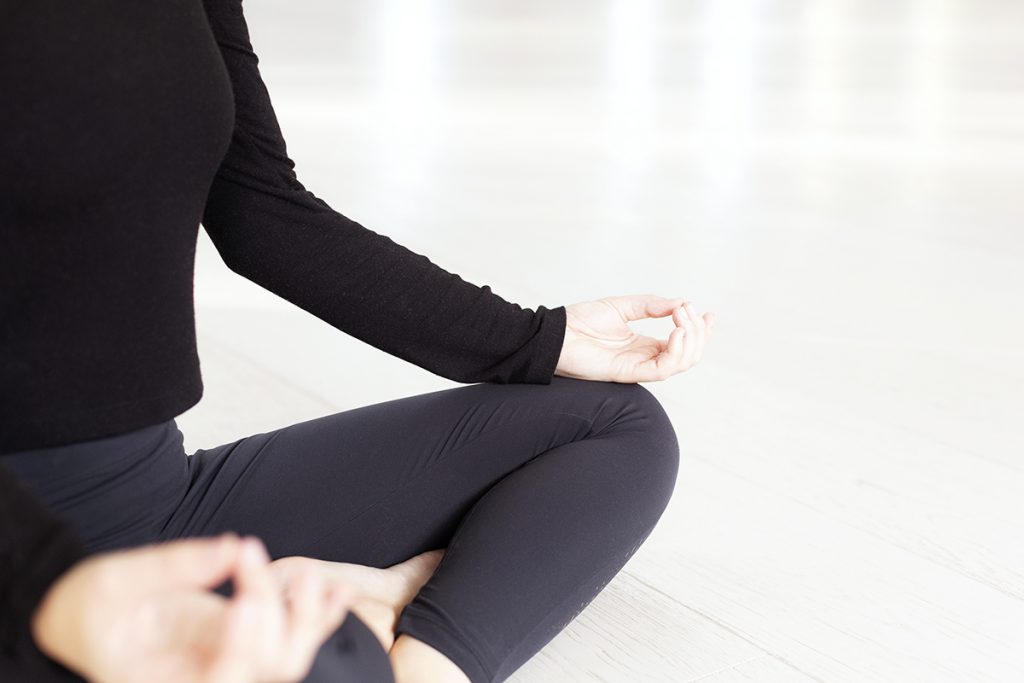 At the same time that we started to overcome the obstacles that arose on the way and were able to integrate conflictive situations, we also kept our intention of serving something greater. Besides, processing the memories and conditionings with which we were used to surviving, allowed us to rescue our individual essence and we opened to experiencing a higher version of ourselves.

The friction that emerged in our daily coexistence gave us the necessary material to root ourselves in our attempt, taking advantage of conflict as an opportunity for transformation towards a higher version of ourselves. We worked on this by welcoming conflict as a growth opportunity. Far from running away from him, we tried to notice it to explore and use everything it evoked for such a transformation. 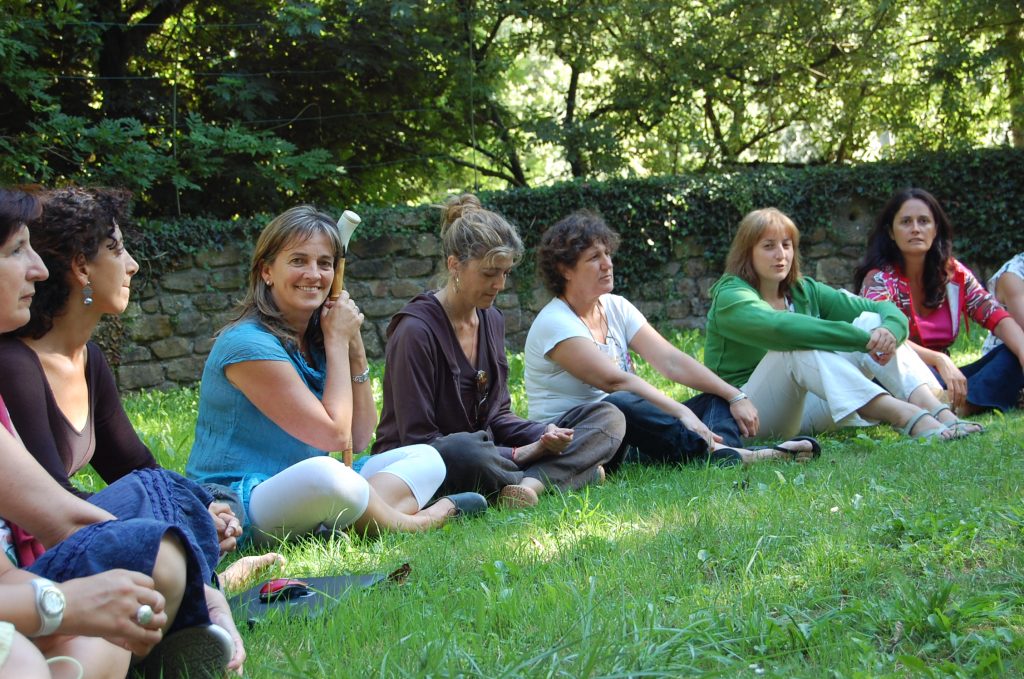 Coexistence was both the engine and platform for personal growth as it offered us the opportunity to work on the contents whose reflection we could see on “the other”. In this sense, the facilitation and personalized coaching work that Irene carried out was essential for the resolution of the conflicts that arose in this collective field.

The community offered us the opportunity to work on the inner conflicts that we tend to project in our relationship with the other and our surroundings. We learned that the other is the mirror we need to look at if we want to include those aspects that, a priori, we do not see in ourselves because they remain hidden. Taking this projection back, while remaining connected and related to those aspects creates a space from which we can look at the other with greater acceptance that, in short, is the reflection of a greater acceptance for ourselves. This continuous and incessant process was essential in building the foundations that allowed us to go through the community experience.

Dealing with the reasons that could separate us from the other and fracture the community became the sap for personal growth and relational development. 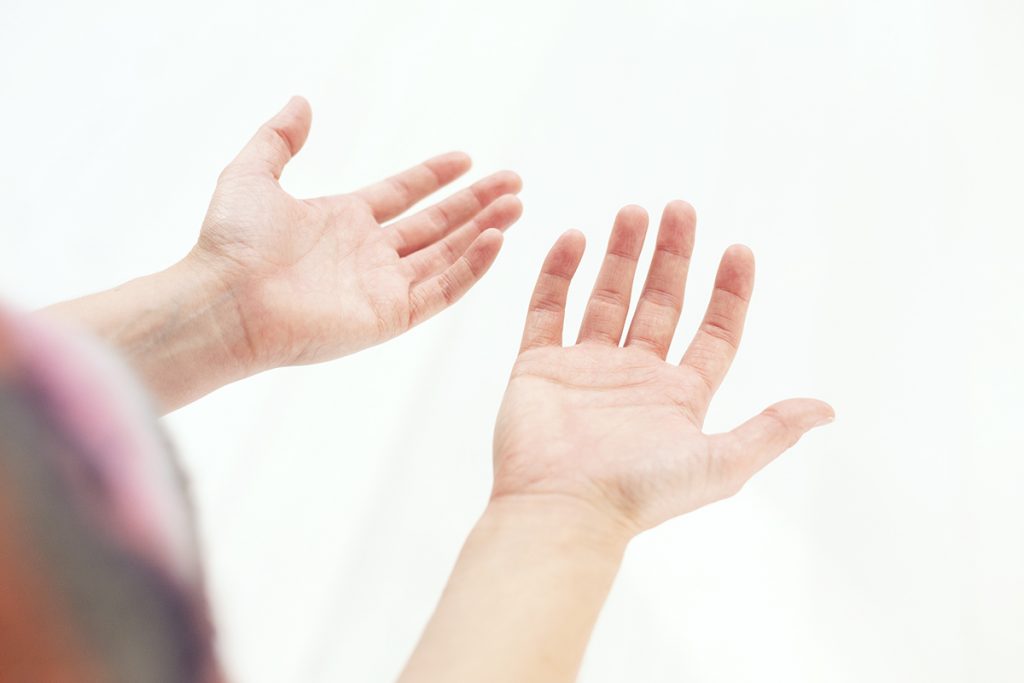 Expression of the inner essence

The rituals inherited from our ancestors and facilitated by Irene Goikolea became an excellent vehicle to articulate feelings and ideas that were not easy to put into words and favored the expression of the soul.

In line with the above-mentioned, it was very important to become aware and keep an eye on the contents that each one had excluded in themselves, since they controlled our lives and thwarted our best intentions. This shadow work promoted by Irene was a true pillar in sustaining the human group.

The circular spaces in the open air, such as the stone circle, the fire circles or the spaces in nature, were the scenario of ceremonies and rituals that favored working and rescuing the values of our tradition that we had relegated and, in some cases, forgotten. 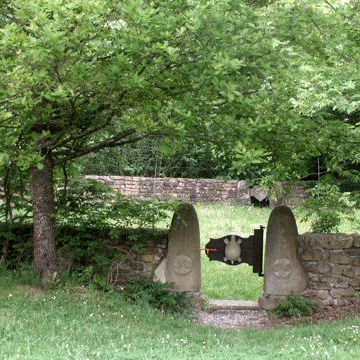 The temazcal (sweat lodge) is a spiritual practice belonging to the Mesoamerican indigenous tradition that seeks introspection, cleansing mind, body and soul as well as connection with Mother Earth. 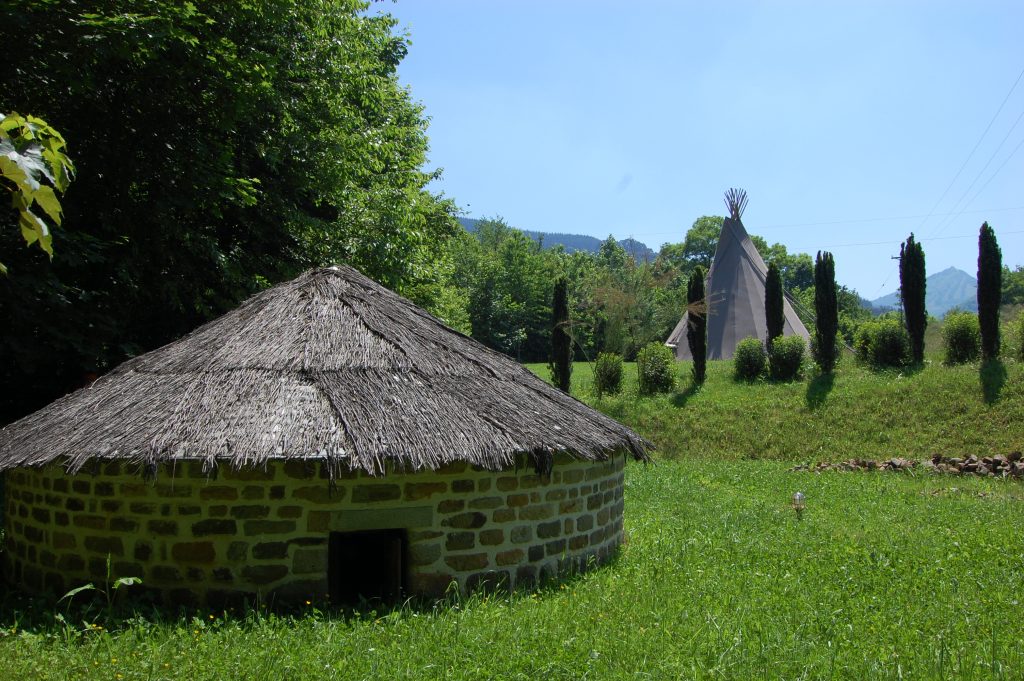 A place where fire takes an important role as it facilitates the expression of the word in connection with the heart. It is a conical tent typical of the North American indigenous culture. 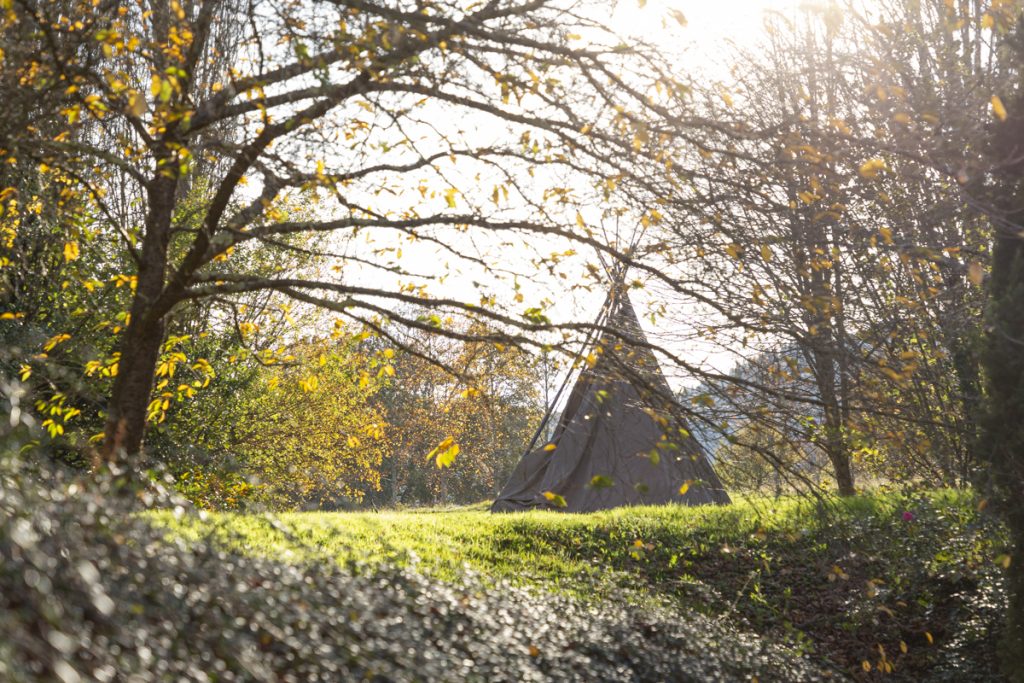 It symbolizes the journey of the inner path and the search for the personal path. The Amalurra labyrinth reproduces the design of the Gothic cathedral of Chartres. 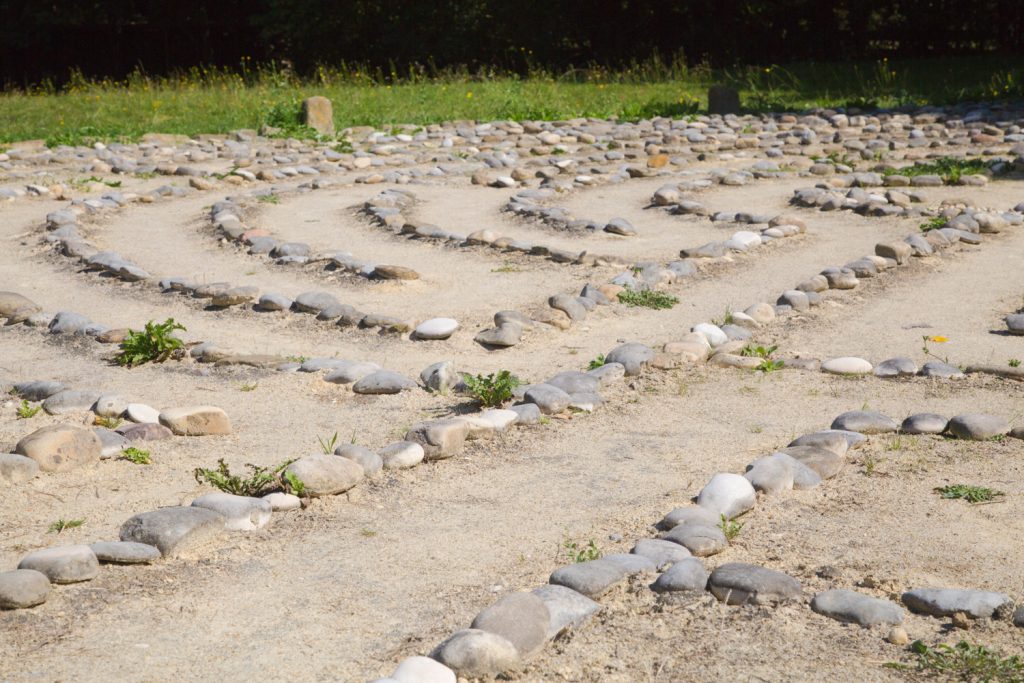 The Altar of the Virgin

Sacred place, passed on by the German seminarians of the Congregation of the Holy Family, previous inhabitants of the place. The Altar invites meditation and devotion. 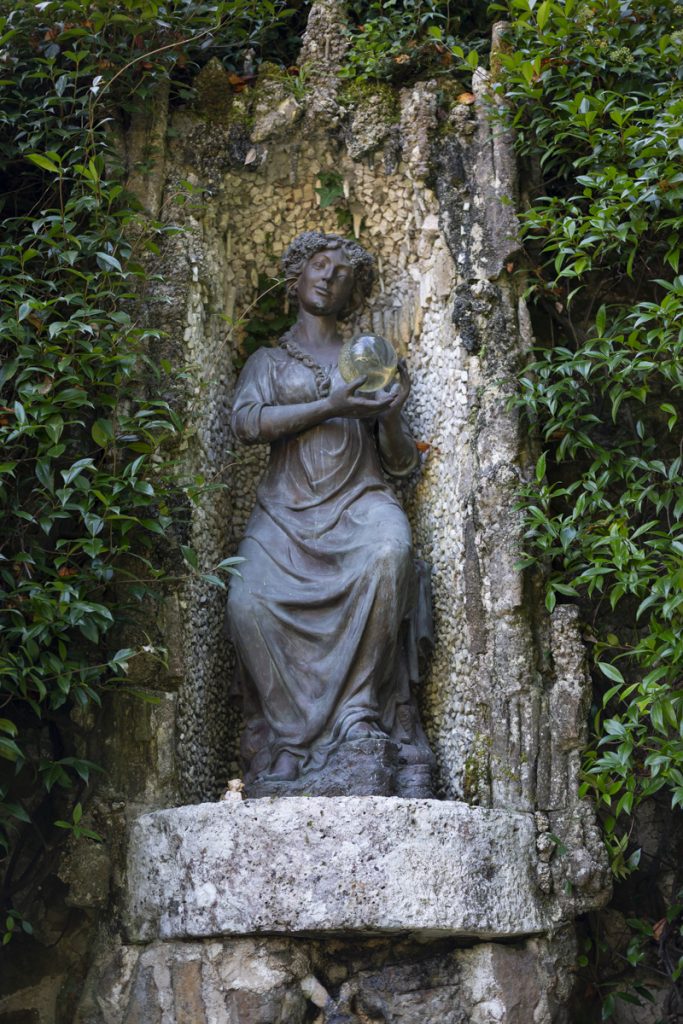